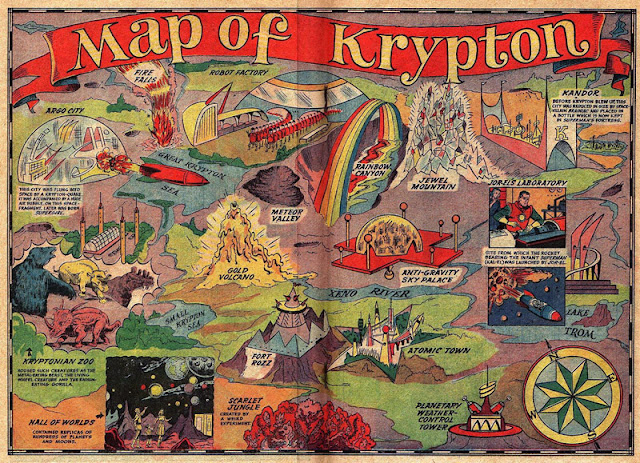 Who else would like to run a Krypton Science Police campaign on this map?
Posted by John Matthew Stater at 2:13 PM No comments:

Some classic image from the 1930's by Basil Wolverton, via Golden Age Comic Book Stories. Enjoy!

Well, stocking old K22B has been a little slow - I finally have some ideas generated for my own chunk of the planet, though several other projects are holding me up on completing them. In the meantime, enjoy some more previews from Luke DeGraw and Sector B8 ...

Hex 67.18
Many animal trails lead to this hex from all directions, merging as they become progressively closer to an epicenter. Animals of all kinds make their way to the center of the hex, where all the trails merge. Once there, they stand without moving for several hours before moving away. Sometimes, a multitude of animals will be present, ranging from snakes, spiders, and other small vermin to desert deer and large predators. They will push together, attempting to be as close to the center as possible. No animal attacks another. Animals in the center of a group will leave by pushing their way past the others and another animal will take it's place.

Should the players dig ten feet down at the epicenter, they will find a disc mesuring two feet in diameter and three inches thick made of metal. It will have a red light in the center of one side. If pressed, the red light will turn off; another press will turn it back on. When on, it attracts animals from all over the sector, at an effective rate of 1d20 per day. If the device is turned off when an animal is present, it will immediately begin acting like a normal animal, i.e. run away, attack, etc. Predator animals are likely to attack other animals, if present, before attacking the player characters.


Hex 160.59
A peaceful village rests here on the shore of a mountain lake. It is populated with a race of fish-scaled humanoids who live both on land an in the water. They speak of a time when they had access to a water-without-end, but now they cannot leave the lake because they cannot survive the surrounding desert. The village is a trading post of sorts, though travelers are infrequent. There are commodities to be bartered for here, most importantly metal workers who shape metal using high-pressure water techniques. All metal items produced here are extra durable (double applicable durability), and bladed weapons are extra sharp (+1 damage).

The local people will tell of a water-stop at the bottom of the lake. If the players can find a way to get to the bottom of the lake, they will find a spring that has been gummed up with the barnacles of some kind of creatures. Straying too close, crab-like creatures will spill forth and attack the group. These crabs are about the size of a dinner plate and have razor-sharp pincers. Strength in numbers is their advantage, so individually they will not be difficult to kill. Once the crab threat is removed (by destruction, or other means), the barnacles can be broken away, releasing a full torrent of spring water. This will cause the lake to fill far more than it's current level and over the course of a few weeks it will spill over to create a new river. This river will flow south into Sector B9 and into the sea there. Randomly determine the direction the river takes in each new hex it enters, though it will always bear southerly. The fish-people will reward the players for their gracious feat.


Hex 12.65
A statue-fountain of a humanoid woman is at the top of this mountain. The fountain is in the shape of a woman kneeling before a basin. The water from the fountain trickles from the woman's eyes and into the basin. The stream of water does not break when falling off the woman's chin, creating a silent flow. Should the players drink from the fountain, they will feel greatly refreshed and focused, removing fatigue and giving them +1 to skill checks for four hours. The water can be bottled, and there is enough water in the basin to fill three normal sized water skins or flasks. The water in the basin refills in one hour. When bottled, the water will retain is unique properties for fourteen days.

The statue-fountain is actually a rendition of a mother-goddess who eternally weeps in joy and sadness for her children. If a player prays to or meditates on the goddess for one hour before the statue and then sleeps at its base during the night, the player will be visited by a dream of the goddess. In the dream, the goddess will reveal the presence of an ancient evil inside the bowels of the arcology to the east. Should the player be willing, the goddess will task him or her with destroying the evil and pledge her assistance. When the player wakes, a 1-inch cube will be in the player's pocket. When confronting the alien at the bottom of the arcology, the cube will strongly vibrate and emit a sound like a continuous bell chime. If presented before the alien, the runes will glow bright blue and the alien will be incapacitated and weakened for five rounds. During that time, the alien will not be able to move, attack, or defend, and all player attacks will automatically hit.
Posted by John Matthew Stater at 8:55 AM No comments:

A World Where Dino's Evolved from Man?

Well, no. Not at all really, but you do need a snappy headline in this blog game.

Some scientists are throwing around the notion that intelligent life on other planets could be of the dinosaur persuasion. They don't really have any evidence, of course, but I think we can all agree that the rigors of scientific accuracy went out the window long ago for some members of the community (i.e. we need a freakin' grant - think of something cool).

Still, it's worth thinking about in terms of writing a sci-fi setting (which this blog is supposedly about). Humans, of course, have the brains, but we also have the thumbs, and that's pretty important if you're going to fashion lasers and rocket ships. On a planet of intelligent dinos, what if none of the dinos with intellect also got the digits to put it to especially good use. They can think and philosophize, but they don't have the tools to dig deeper into the mysteries of the cosmos. Meanwhile, some other branch of the family got the thumbs, but not the sense to use them. So, when planning your sector of Keppler-22B, please give some consideration to super-genius saurpods or just good old fashioned intelligent raptors, won't you.

GIF found at HATE:WRECK:PERIL, along with these dandies ...