Sector I-5 - First Look from John Till

Welcome to Sector I-5! The majority of the sector is tropical and/or subtropical with major land masses, islands, and oceans. This looks like a very lush area, with plenty of opportunity for jungle and deep sea exploration. There are also some desert and hill areas on the southwest side of the largest land mass. There is bound to be something interesting in that area as well. 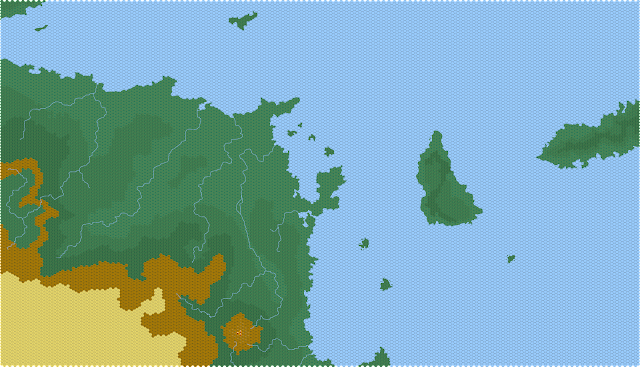 Our initial focus is on Hex 180.73. It is located on the southeast corner of the tear-shaped island to the center-right of the sector map. Most of this hex is a great ocean bay that was identified from orbit as a potential area suitable for coastal settlements and harbor construction. 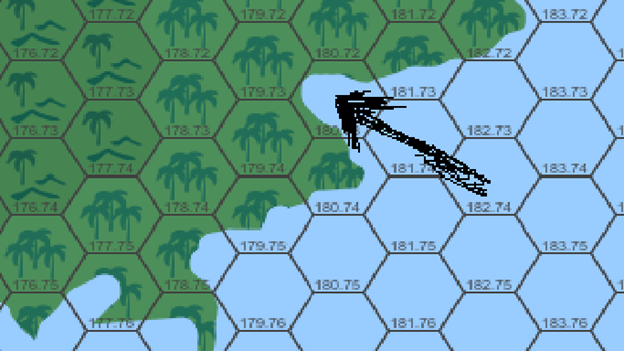 The bay has been dubbed New Manila Bay due to its oppressive humidity. It has abundant marine life including both armored fish (similar to Placodermi) as well as analogues of Earth’s more modern soft-bodied fish.

There are also numerous bioluminescent Cnidarians (jellyfish-like creatures) which surface and congregate several times per day. Their pulsating nocturnal displays are quite remarkable! The creatures also congregate in patterns that display mathematical progressions, which has been rather unsettling for observers.

Another distinctive feature of the bay – one which has been subsequently observed in other ocean areas – is the appearance of red scum on the ocean surface. This coloration is actually the chum created when pods of huge Rotorfish plough through schools of soft-bodied fish, slicing and dicing them before filter feeding on the blood and meat bits.

The soft bodied fish are also a potential food source. Analysis will reveal that if a few genes are altered, the fish will be an excellent source of nutrition for human settlers.

Humans are not the first intelligent species to explore the bay. Indeed, several large catamarans are hidden in one of the bay’s many lagoons. Diligent explorers will find them on the north shore of Hex 180.73.

Be sure to also check out FATEsf.blogspot.com for new and alternative information on Kepler 22-B.

*I hyphenate this because an I (i) looks so much like an l (L)
Posted by John Matthew Stater at 11:14 AM No comments:

I don't know what this is. Found it on Wikimedia Commons. I do know that it is the work of Gnot Guedin, so don't steal it. Just enjoy it.

Email ThisBlogThis!Share to TwitterShare to FacebookShare to Pinterest
Labels: aliens

Hermits in the Hills: These hills have long been attractive to a breed of strange, religious hermits from the south. The caves are dry and cool, and the landscape abounds in easily accessed edibles, especially a button-sized mushroom that helps the hermits slip into their trances. The soft-shelled southerners have built quite a pilgrimage business around these hermits, with well-traveled trails leading down from the hills to large wooden roadhouses with grand courtyards, stables, etc. These are linked to the southern market towns via brick roadways that are beginning to show their age. Spacers are generally unwelcome at the roadhouses and in the Hermitage Hills, as they are considered a pox on the local culture and a threat to the ruling elite of the market towns. The loudest opposition comes from the few spacers that live among these people and have "gone native" - though not so native as to not use a blaster to fry unwelcome intruders.

Mining Operation: A small band of prospectors has set up an illegal mining operation here, using heavy industrial disintegrators to plow up large swathes of the landscape to get to the veins of valuable ores (triskellium, lopadite and pseudo-silver deposits) below. The last batch of rains washed down from the hills and destroyed a portion of the camp and caused a flood in the lowlands. The sodden landscape is now crawling with bee-spiders, whose stings carry a rotting disease that has claimed many of the miners.

Landing Strip: The survey scouts have cleared this area to build a landing strip. The strip is too small for large, interplanetary craft, but is perfect for the light atmosphere freighters that deliver supplies from the Port Gernsback. A small caretaker's shack has been constructed from corrugated plaz-board and tin packing sheaths, and is lived in by Urgo Ezbik, an odd man who survived a zombie war but lost his left arm (he thinks it is still out there looking for him) and a small piece of his sanity. Still, he's a wiz with aircraft repairs. He has stocks of ammunition and food hidden throughout the area.

Olvugai Scout Survey: A team of olvugai are scouting this area in pogos on behalf of the Andromeda Confederation. They are mercenary scientists, but not particularly violent. One has been infected by alien bacteria (an oddity for olvugai) and they are at a loss to solve the problem, as their small supply of medicinal powders and tonics has proven ineffective.

Ancient City: The remains of an ancient city of the three-toed people sits here, choked by jungle and as-yet unexplored by spacers. The ruins hide large reservoirs of fresh water (much of it heavy), a large idol of golden-radium, subterranean laboratories, armories, treasure vaults and summoning chambers, and other wondrous things. Those who enter must beware the fungal growths that look like unicorn horns that will inevitably spring up on their unprotected skulls. The images of the three-toed people all show similar horns on their heads. They are, in fact, a form of fungal parasite/symbiote that did most of that species' heavy thinking and planning. They survive as an airborne fungus that clings to and then grows on sentient beings. There is a 1 in 6 chance per person they grow on that they will make meaningful contact and begin conquering their mind. Otherwise, they scramble a person's synapses and leave them a shuddering, incoherent mass on the forest floor.

Posted by John Matthew Stater at 2:56 PM No comments: