This is the master map for Kepler-22B 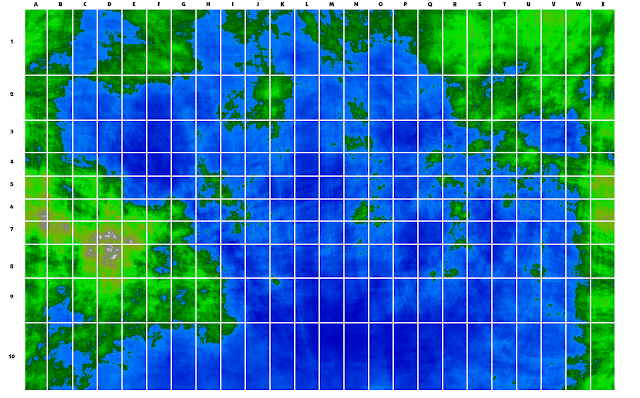 Rows 4-7 are tropical or semi-tropical.

Rows 3 and 8 are temperate and often to hold deserts or dry scrubland.

Rows 2 and 9 are also temperate, but tend to more fertile and wooded.

Rows 1 and 10 are cold and consist of taiga and tundra.

C6 - 241W x 124H - John Stater - Tropical jungle, contains ancient ruins of "Preserver Domes" and is inhabited by dinosaur-like creatures. Also contains Jones Station, which garrisons a squadron of Galactic Rangers and serves as the base camp for the prospectors of the Sol-Aldebaran Mining Company.

G6 - 241W x 124H - No Assignment Yet - Notable, because this wooded sector holds Port Gernsback, a star port and traditional deepwater port that is usually the arrival point for off-worlders.

I2 - 125W x 124H - Jeff Rients - Windswept volcanic islands, about the equivalent of Iceland with a warmer climate.

V4 - 214W x 124H - Chris Sakkas - A narrow strip of land between the ocean and a shallow, inland sea. It is temperate land, soaked with rain and those valleys not stripped of good soil are fertile.

Note - the numbers are the number of hexes wide (W) and high (H) of each sector map.