The survey team in G-9 has found a new species:

Saurians (lacerta entia Keplerii-Martinii) are shy, greenish humanoids, approximately 2m tall and have been seen singly or in groups of up to 6. They appear to have lizard-like skin and have been officially designated as ‘Saurians’, though the survey-teams insist on calling them ‘Lizardpeople’. They are manifestly intelligent as they use complex tools. Their observed technology is primitive, appearing to be at a broadly ‘Stone Age’ level, consisting of what appear to hunting weapons such as spears, and strap arrangements worn about the body which appear to be toolbelts. Several settlements have been noted (designated ‘Saurian Settlements (SS) 1-17) hereafter). Whether these Saurians are the same as, or a related species to, the Reptiloids reported by the Bituin Expedition in Sector I-5 has not yet been determined.

This area contains several small settlements of Saurian natives, all situated in marshy areas. Each settlement contains a number of ‘hut-clusters’ - typically, one larger hut (3-4m) will be surrounded by a small number (1-5) of subsidiary buildings (approximately 2m) as a rough ‘cluster’ up to 15 metres in diameter, arranged on the edge of bodies of open water. Each settlement so far identified is made up of 1-6 of these ‘hut-clusters’. The natives appear to be involved in complex water-management strategies; it is assumed that this is some form of aquaculture, perhaps involving the cultivation of shellfish.

Posted by John Matthew Stater at 8:05 AM No comments:

This Just In - Survey Team Reporting from Sector G-9!

I've recently received a few transmissions from Sector G-9 and wanted to share them with the community!

SOPHIA: the Research Division of OmniVersity-Combine.

SOPHIA is pleased to announce that it has been successful in securing the contract for overseeing the survey-work in Sector G9 of Kepler-22B. We are proud to be associated with this project, especially since Johanes Kepler, who dedicated his life to study of the universe and after whom the telescope that was used in the discovery of Kepler-22B was named, worked at two of the OmniVersity’s constituent institutions, the Universities of Graz and Prague.

SOPHIA will shortly be dispatching the Curiosity, one of its two Corona-class starliners, as a base for its survey teams. Commanded by Captain Zhao Jing, a veteran of 16 deep-space survey missions, the Curiosity is expected to be home for the next four years to the crew of 44, and survey teams numbering 119 scientific and technical specialists. 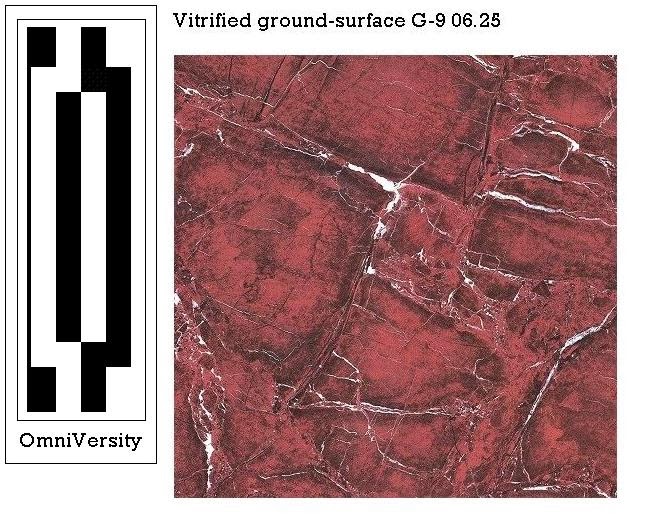 In this region is a large area of vitrified mineral deposit some 35km wide. It is composed of a form of quartz which seems to have been fused by immense heat. Whether this has been caused by a natural geological process, or by some application of unknown technology, is not at present known. The process appears to have happened in the relatively recent past, perhaps between 2-5,000 Earth-years (2,700-6,300 stellar orbits of 22B). Preliminary analysis of high-altitude survey data suggests that there may be several other locations where this phenomenon has occurred.

One of the G-9 creatures:

Drifters (flexures volans Keplerii-Martinii) (also known as ‘Jellybirds’): These organisms resemble jellyfish, but utilise a lighter-than-air gas in their membranes to ‘fly’. They are composed of a cluster of lifting-sacs with dangling tentacles approximately 2m long which trail on the ground or dangle a little way above it. The lifting-sacs tend to hover around 1-3m above the ground. The tentacles can deliver electrical or poison attacks, or grasp and exert force in a similar fashion to an octopus on Earth.

Combat with these organisms is additionally hazardous as the gas they use to fly seems to be hydrogen. Projectile and edged weapons can damage the sacs, but energy-weapons should be used with caution as they can cause the Drifters to explode by igniting their lifting gas.

While, at surface level, only small groups (typically in the range 4-10) have been encountered, large groups have been seen at a distance at higher altitudes (several hundred at a time). This could indicate that these organisms are migratory, either through design or as a result of dispersal through weather-patterns. It is not known at present whether these organisms are intelligent in any way, or what (if anything) might attract them.

We eagerly await further reports on this sector of the super-planet!
Posted by John Matthew Stater at 9:44 AM No comments: 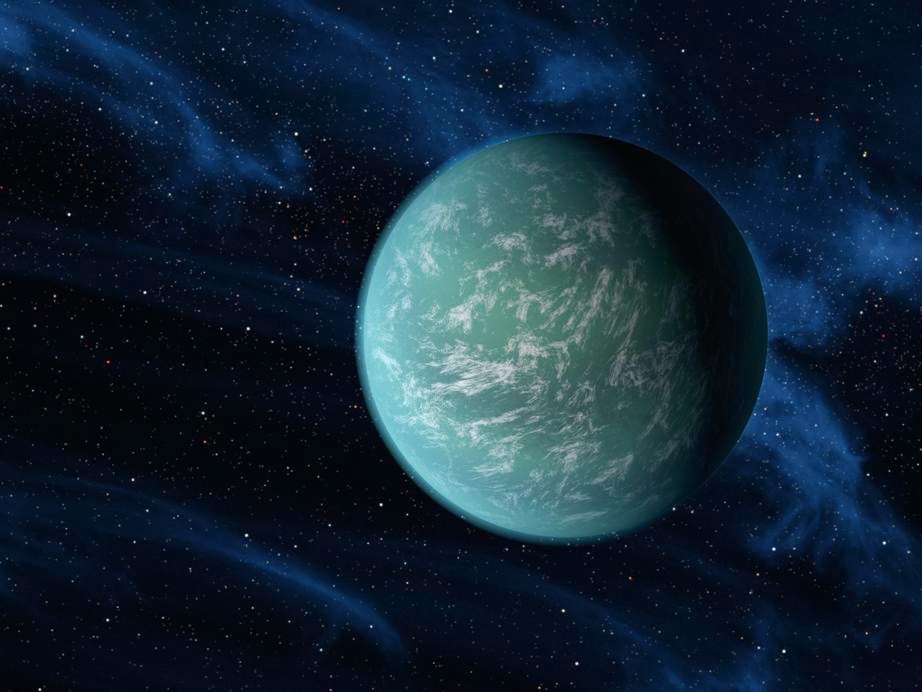 The good folks at HereticWorks have just come through with a table of events and encounters for sector T-3 of Keppler23B. Here's a sample ...

1. The last 3 planetary days have seen a massive pollination-event along the coasts of the salt-sea. Thousands of species of plants are involved. Everything is coated with a 1d4 inch layer of sticky pollen in a wide array of colors.

2. Due to a series of violent underwater tremors followed by the venting of super-heated volcanic gasses, there have been multiple die-offs among deepwater fish. The venting has also formed a series of pockets of warmer than usual waters rich in sulfur and selenium, among other trace minerals. Where the fish have been decimated by this event, hordes of shellfish, crustaceans and other, hardier species have proliferated in the hotter, more acidic waters of these pockets. It is undetermined as yet if this is only a temporary phenomenon, some sort of cyclical event, or a one-time cataclysm.

3. Forest fires have swept portions of the Mountain Ranges North of the Great Bay. The fires were started by thunderstorms.


If you want to read more, head on over to their excellent blog and let your eyeballs do the walkin'.
Posted by John Matthew Stater at 3:06 PM No comments:

While driving to work this morning, I was listening to classical music and musing on the design of cars and spaceships. I don't mean real spaceships, of course - I mean the kind you see in movies, comic books, pulp fiction and television - the good stuff. I also started thinking about mens' taste in women, and how the styles of disparate things tend to conflate at different times. With that in mind, I decided I was going to put together some images from different years (or small spans of years) of the top spaceship of that time, the top car of that time and what were considered the top sex symbols of that time to see if they clicked. 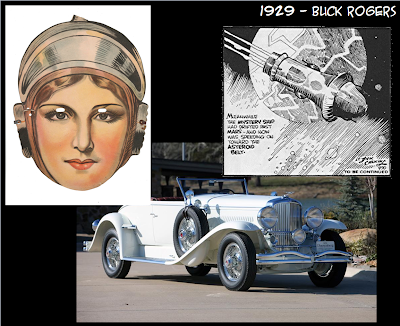 We'll begin with 1929 and Buck Rogers. The spaceship was still in the "could have been designed by lonely housewives" era. Fairly sleek and only a few doodads stuck to the outside of the ship. For our car, we have a 1929 Duesenberg - also pretty sleek, formal and yet also sporty. Whether Buck's spaceship had leather seats, I don't know. For our sci-fi beauty, we have Col. Wilma Deering, Buck's erstwhile companion and drawn as a classic beauty of the era - rounded face and graceful lips. 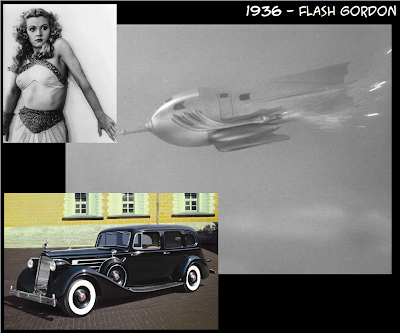 By 1936, Flash Gordon has burst onto the scene in the first of his film adaptations. The spaceship isn't much different than Buck Rogers' craft, though perhaps a bit sportier (check out the chrome!). Dale Arden, as played by Jean Rogers, conforms pretty closely to the earlier beauty standard, and the car isn't terribly different from the 1929 Duesenberg, though you'll note the nose is slanted back a bit. 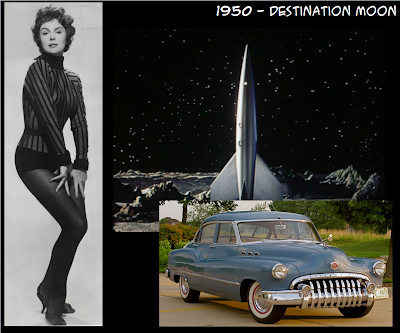 1950 brought the film classic (?) Destination Moon. Destination Moon at least played on being hard sci-fi, though the design was definitely of the moderne period, with the sleek spacecraft. The beauty of 1950, Erin O'Brien-Moore was pretty sleek herself, and shows how tastes were changing at the dawn of a new decade. The car is a bit more compact than in the 1930's, but in this case it looks like the spaceship designs are beginning to presage developments in automobiles. 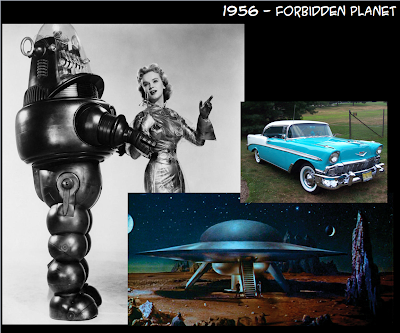 In 1956, Forbidden Planet put earthlings in a flying saucer (guess those captured German scientists were finally earning their keep). Beauty isn't much changed from 6 years ago, and the car, a 1956 Chevy Bel Air, is not yet exhibiting the giant fins that will grace vehicles in the late 1950's and early 1960's. 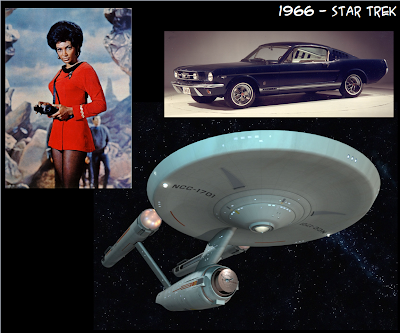 By 1966, Star Trek has premiered. The Enterprise is unlike any spaceship audiences have seen before, and also notable is that the sole beauty of the cast (unless you include Sulu) is a black woman! Nichelle Nichols typified late '60s beauty - curves and tall hair. The cars are becoming more slick as well - away from the tail-fins and into the muscle car era. 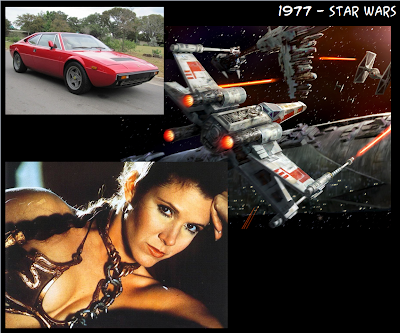 The next big leap, in this case back in some ways and forward in others, was 1977's Star Wars (you might have heard of it). For the first time on film, we get a real sense of the "starfighter" - fighter aircraft in space. Yeah, the Star Destroyers were pretty iconic as well, but you really can't beat the X-Wings and TIE Fighters for capturing the imagination of kids in that era. Our beauty is, of course, Princess Leia (Carrie Fisher), who really found herself thrust into unfamiliar territory in her slave girl costume. The 1977 Ferrari pictures seems to have a similar profile to those X-Wings. 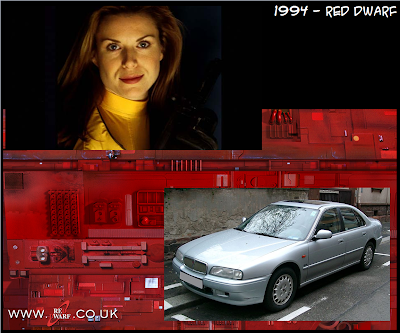 One last stop, and a leap forward to one of my favorite sci-fi series - Red Dwarf. Not American, and played for laughs, it introduced a completely utilitarian (and grandiose) spacecraft in the eponymous Red Dwarf. By 1994, we had maybe my favorite of all the sci-fi beauties introduced on this post - Chloë Annett as Kristine Kochanski (I like my women smart, beautiful and with a wry sense of humor) and the fairly utilitarian Rover. Substance over style in 1994 sci-fi.

Okay, there's many more I could do - various incarnations of Star Trek, Alien, etc. I'll leave further explorations to others.
Posted by John Matthew Stater at 10:47 AM No comments:

Our good friend John Till - the workhorse of Strange New World - has written in with a marine encounter table for New Manila Bay in Sector I-5. Enjoy!

Roll 2D6 and consult the results below.


Exploration of the area around the huts proves slow going, as they are built on algae-rich shallow wetland areas with 10-20 cm of stinky green water over a dense layer of mud that is .5 to 1 meter thick.

The huts vary from 5-8 meters in diameter; inside the huts there is a variety of small objects (cutting tools, small piles of painted shells and stones, reeds woven into likenesses of wetland creatures). The center of the hut slopes steeply down so that the “floor” of the hut is in fact a bowl of wetland water with a mud bottom about 3 meters below.

A water-filled channel near the bottom of the hut pool connects this hut to a network of channels leading to the other huts. Visitors will feel they are being observed the entire time they are in this area.

Scanning the nearby forest areas with field glasses will indeed reveal that the explorers are being observed by several brown-green bipedal dinosauroids. These creatures are slightly taller than average humans: they’re about 6’8” tall. Most of them are caked in semi-dried mud. They also carry spears. They will withdraw if the explorers approach.

Hex 180.172: A bit further inland is a lagoon with deeper water. In the middle of the lagoon, three large plant structures rise up above a mud island. These structures are similar in diameter to the huts. The flat round upper structures of these plants have numerous holes. Some contain eggs within them.

An Intro to Sector T-3

Hereticworks does not mess around when it comes to Kepler22B!

Check out their intro to their sector BY CLICKING HERE

These folks put my inane ramblings to shame! Excelsior!
Posted by John Matthew Stater at 3:23 PM No comments: